ES6 introduced some important changes in JavaScript from previous versions. Here we discuss some of the tricky but important features.

Before we begin, let us setup the environment to test our JavaScript (JS). We would create an index.html page, and run the JavaScript when the page is loaded into the browser. To do so, we would load our JavaScript within the tags <script> </script> in our html page. Our html page would serve one more purpose, that is to also display 'Hello JavaScript' in the browser. We would be able to inspect what the JavaScript is doing behind the scenes, by going in the Developer Tool setting from our browser. We are using the chrome browser  for this demonstration. In chrome, you can also open the developer tools by pressing 'Ctrl+Shift+I'. The JavaScript which would load within the script tags in our html file, would be saved separately in a file called 'testapp.js'.

To edit both the html file and js files above, we would use VS Code editor. Download and install it, if you don't have it installed on your system. We are going to install an extension called 'Live Server' on VS Code. Visit the official documentation of VS Code or google it, if you are not aware how to install extensions on VS Code. What this extension allows is to test our index.html instantly in the browser the moment we make any changes and save our code in the html and js files above. Once the extension has installed, create a new folder somewhere in your system and create two files - index.html and testapp.js in the folder. Open the html file and and put the below code.

Now, in VS Code, save the file by pressing Ctrl+S. Now right click anywhere in the html file from VS Code and choose 'Open with Live Server' from the options upon right-clicking. This would open the url 'http://127.0.0.1:5500/index.html' in your default browser. If chrome is not your default browser, copy paste the above url in chrome. You should see 'Hello JavaScript' in your browser. Open the developer console discussed before, by pressing 'Ctrl+Shift+I' in the chrome window and choosing the Console tab on the right. Now, every time we save our html or js file in VS Code the browser window in chrome would be refreshed automatically. We would be able to see the output from our JavaScript in the browser window developer console tab. We would use the console.log function to output results to the developer console. For example, if we open the testapp.js file and add the line below and then save the file we would see the output 'Hi Scripters!' as follows in the developer console.

If you could see the above output in the developer console, then we are ready to test the ES6 concepts covered in this article.

The first concept we are going to cover is variables declarations and scope. In older JavaScript, you can declare a variable two times with 'var' and this would not produce an error on compile. So essentialy you could do something like below. The console would show 2 upon executing the below.

In terms of scope, older JS has global and function scope for variables. So in the below example, we cannot use the variable y outside the function.

In ES6, we have an additional scope called block scope. This means variables declared (using let and const) within the scope of a block statement cannot be re-used outside. So in the below example, re-using the variable y outside the for loop would produce an error. 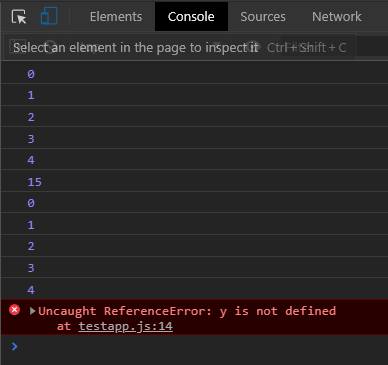 The output would be

We see that even without repeating the key-value pairs in the second syntax, we were able to get the same output.

By object deconstruction, we mean that we want to access different parts of an object. Say for example, we have an object called Student with variables called Name and DateOfBirth. In older JS, to access individual parts we need to access them separately. See below.

Both the above would produce the same output.

Consider the conventional way of writing functions in JS. In the example below, we first define a simple function which adds two numbers in older JS. Then we define the arrow equivalent function (() =>). Both these functions would produce the same output of 3 in the console.

The arrow function can be further simplified as shown below by getting rid of the curly braces and the return keyword. Note that this is only possible when we have only one statement within the function's curly braces.

We can further simplify arrow functions if the number of arguments is less than 2. See example below.

Arrow functions are most useful when creating anonymous functions, that is, functions without a name. An example of using anonymous functions is while passing functions to another function. So imagine when you are adding a click event to an element on your page. The click event would trigger another function, which could be like the one in the example below. In this example, when the user clicks on the message 'Hello JavaScript', in our index.html page in chrome, the messsage changes to 'You clicked me'.

Another difference between older JS functions and arrows functions apart from the simpler syntax is about the scope of the 'this' keyword. In older JS, 'this' refers to one level above it's current scope.

This would be more clear from the example below. In the example, for older JS, the Student object has a function variable called PrintName. The function PrintName first prints the name of the student. PrintName has another function inside it called PrintDOB which prints the Date of Birth of the Student. However, PrintDOB cannot capture the this variable available to it's parent function. That's why we have to create another variable called that, after which the child function can access it's grandparent object's DOB by referring to that.

In older JS, strange it may seem, but we cannot provide default values of the function parameters directly after the arguments. To achieve this we have to resort to  other clever ways such as below. For example, in the example below,  if we wanted to set default values of 1 to x and y, within the function we define two dummy variables a and b which have values either provided by the user (x y) or 1. Then we can call the function without specifying the values of x and y and the function would return a value 1.

In ES6, we can provide default values just like functions in many other programming languages i.e right after the arguments in the function definition. Now if we call the function multiplyES6 without specifying any values for x and y, the function would assume the default value of 1 for both x and y and would produce an output of 1.

To inherit the parent object constructor function methods we have to use the prototype technique again. The output of the above is shown below. 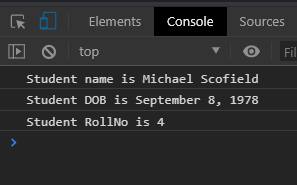 In ES6, we can achieve the same but with a more elegant class object method. Inside the class object we first create the object variables with a 'constructor' method. The object methods can then be directly added below this. While inheriting, we need to first use the 'extends' keyword to inherit from the parent class. Next, inside the inherited object's constructor method we need to initialize the parent objects variables via a 'super' method. The parent objects user created methods can directly be inherited into the child object. See, example below.

This would produce the output below.

where param1, param2 etc are optional.

As per Mozilla MDN,

A callback function is a function passed into another function as an argument, which is then invoked inside the outer function to complete some kind of routine or action.

a callback function is a template function we specify as argument to another function which would be invoked inside that outer function.

Below is our demo callback functionality. It's a bit tricky to understand at first. However, you would understand it once you go through it once or twice.

We want a function FetchData to send us a call back by outputting obtained data in the console when it has finished fetching data from the database . The DataKey is the value for which we want to retrieve data. To simulate database extraction we are just using the random function to return any random value and also waiting for 2 000 miliseconds (2 seconds) to complete the operation. After 2 seconds, the obtained random data is sent to the democallback function in the form of an object literal. The object literal is the value which is passed to the function in the democallback variable .

We actually perform a callback with the above function by providing a DataKey of 5 and passing a function (which would output in the console). In the FetchData function, the object literal is passed as value of argument x of the function inside the variable democallback. The output would look something like below.

The equivalent of call backs in ES6 is promises, which allow a more elegant method of performing callbacks. Also, it is possible to catch errors. As per Mozilla MDN,

The Promise object represents the eventual completion (or failure) of an asynchronous operation, and its resulting value.

The outputs from our promise calls would look like below.

In the above example, we can pass a DataKey to our promise construct just like we were doing in the callback functionality discussed before.

This finishes our coverage of the ES6 tricky concepts. There are many other concepts in JavaScript which are not covered in this article. I covered only those concepts which are heavily used in JS terminology especially in applications built with Node and React and are the most trickiest to understand at first!

This article should help you get up and running with JavaScript in no time.

3 Likes
468 Praises
0 comments have been posted.