The most comprehensive guide to automated feature selection methods in Python

To demonstrate the automated feature selection methods in Python we would use the diabetes dataset. Import the diabetes .csv file into a data-frame with Pandas as below:

You should see the data frame as below:

10 of the most useful feature selection methods in Machine Learning with Python are described below, along with the code to automate all of these.

Select X as the set of all features, and Y as the repsonse variable. Here, the response variable Y is class.

With the .get_support method of sklearn classification objects we see that the feature with index 6 in the feature matrix has been eliminated.

2) Remove features which are not correlated with the response variable

In our example, we can calculate the correlations and visualize as below. Note that we are using the matplotib and seaborn libraries for plotting the correlation matrix as a heat-map. So install these libraries beforehand: 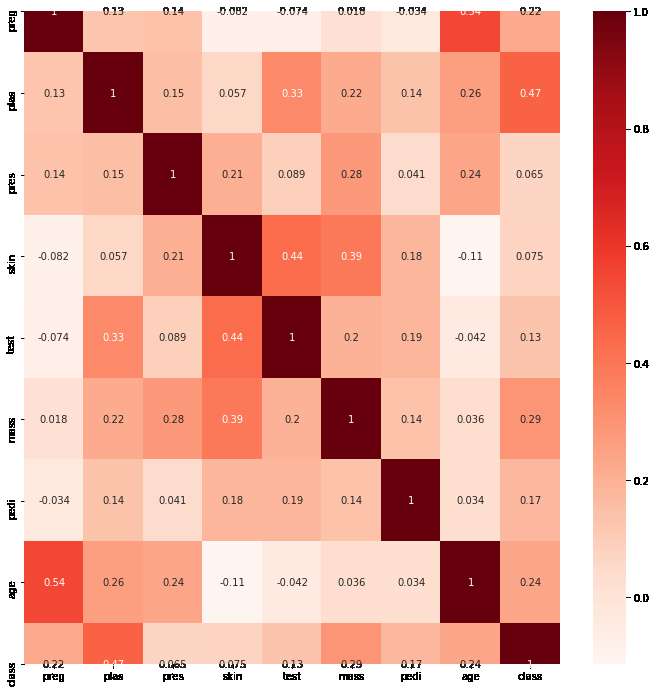 To automate this method we can create a filter to select only those features which have a correlation coefficient above a threshold (just like the variance threshold). In our case we use a threshold of 10%. The code for the filter would look like below:

The selected features produced with the above code are shown with their correlation coefficients.

As per sklearn this method removes all but the k highest scoring features. The score is based on uni-variate statistical tests. Here, in the example below we use the ChiSquare scoring function.

As before, we first create an object of the SelectKBest class with k = 5, i.e. we want to select 5 best scoring features. The score function is chi2. Next we fit the KBest object with the response variable X and the full feature matrix Y.

We can get the scores of all the features with the .scores_ method on the KBest object. Similarly we can get the p values. We can combine these in a dataframe called df_scores.

Since we are interested in only 5 of the best scoring features, we can get the feature name list as below:

The code is very similar to that of  SelectKBest, with the only change that we provide a percentile in the SelectPercentile object created.

We would see that with the top 80 percentile of the best scoring features, we end up with an additional feature 'skin ' compared to the K-Best method.

To use the sequential step wise forward feature selector we would have to use a special library called 'mlxtend'.  Install this library from PyPI. As per the official package, the goal of feature selection is two-fold - to improve the computational efficiency, and, reduce the generalization error of the model by removing irrelevant features or noise. Step wise or sequential feature selectors achieve this by adding or removing one feature at a time, based on the classifier/estimator performance until a feature subset of the desired size k is reached.

Here we first use the forward selector. The code is very similar to the ones we have used above. We first create an object of the SequentialFeatureSelector class from mlextend.feature_selection. Because these feature selectors work by evaluating model performance for every added or removed feature, we need to use an estimator. Here we use the RandomForestClassfier from sklearn. Next we fit the selector object with the response variable and the feature matrix. We want to chose the best combination of 6 variables, so we set k_features = 6 in the StepForward selector object. We also want to cross-validate model performance for every combination of variables, so we provide a cv value of 5 for 5 fold cross validation. If you want to skip the cross validation, simply put a value of 0 or ignore the parameter (default value of cv is 5). For the SequentialFeatureSelector object to work as a forward selector, we set the forward value as True .

When the above code is run, while fitting the data, it shows the best combination of features and model performance for every number of features till the k_features value is reached.

Via the .sunsets_ attribute, you can take a look at the selected feature indices at each step.

So you could look at the best features for each step of the iteration as below:

You could look at the indices of the feature columns through the k_feature_idx_ method.

You could use these indices to find the feature names as before.

You could also use the inbuilt k_feature_names_  method to directly look at the feature names.

Lastly you could get the best fit score of the model with the selected features, with the .k_score_ method.

The score in our case is below:

The backward method is exactly the same as above, except we start with all the features and then remove features until we find the best combination of the k_features. The advantage with this method is that if the k_number of ...

You are seeing a restricted version of the article. The article is reserved for registered users only whose profiles have been approved. To read the full article, register on the website and then send your profile for approval. To send your profile for approval, after registering, fill in the required details in your profile section and press submit for approval. Only genuine and non-malicious profiles would be approved. Corporate profiles with intention to use such free information for profit making would not be approved.
4 Likes
322 Praises
14 comments have been posted.

Hello! I would greatly appreciated an approved on my profile so I can read the rest of this great article :)
|   •  Reply

Could you please fill out your social media details in your profile section. We do this to identify real users/avoid spam.
1 |

Waiting on profile approval for the most important part: how to find the proper thresholds.
2 |   •  Reply

Your profile has been approved. Please login to read the full-article.
1 |

Thanks Mayank ! Happy that it was useful for you
|